Call The Squad to Demand a $15 Minimum Wage

A year ago the coronavirus pandemic pulled the rug out from under working families. In response, Biden and Harris promised to pass a $15 minimum wage in the Covid-19 relief bill. But on Friday, Kamala Harris and eight Democratic senators joined with Republicans to kill the $15 minimum wage.

One of those Democrats, Krysten Sinema of Arizona, proudly had her Marie Antoinette moment. In a video that went viral, she brought a cake onto the Senate floor and gave a theatrical thumbs down to the $15 minimum wage that would lift millions out of poverty.

The bill goes back to the House for final passage tomorrow and it is considered a package that Biden must pass. That means we still have one major chance to get a $15 minimum wage passed. All we need is for six courageous House progressives to vote against the stimulus bill until it includes the minimum wage increase. That will force the Democrats to put a $15 minimum wage back into the bill to recover the votes necessary to pass it.

Please call The Squad now and tell them that we must raise the $7.25 an hour poverty wage to $15 an hour and include it in the stimulus bill tomorrow. 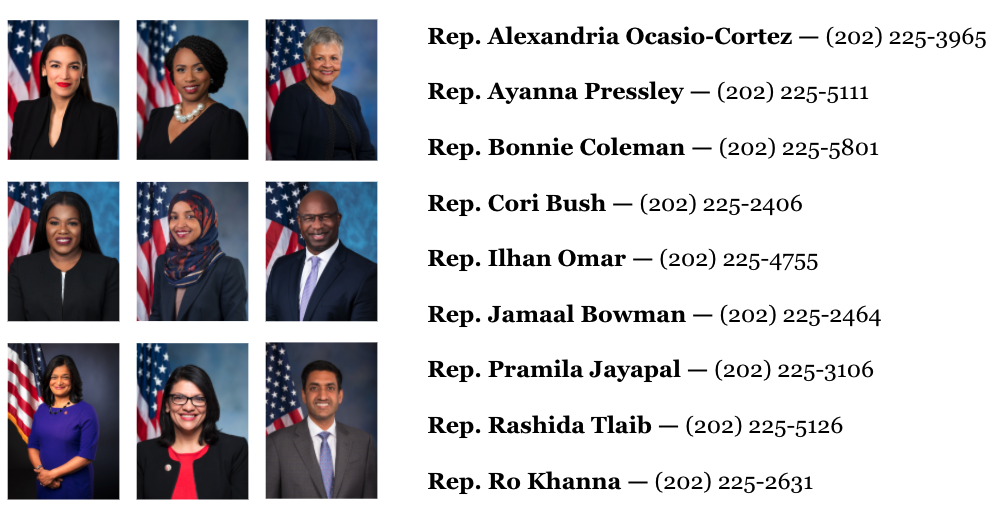 Working people have been kicked to the curb in the relief bill. The $2,000 checks Biden promised were cut to $1,400, delayed by two months, and subjected to means testing that will yank checks away from 17 million Americans. Student loan cancellation was dropped from the bill. A basic income was rejected. And now they want to strip it of a $15 minimum wage. Enough is enough.

Our economy is broken. The United States ranks dead-last among developed countries in the size of its minimum wage. There is not a single U.S. state in which a minimum wage worker can afford to rent a two-bedroom home. The hardship is even starker for tipped workers, who make $2.13 per hour, and workers with disabilities, who earn just $3.34 per hour. Before the pandemic hit, 140 million people already lived near or below the poverty line.

The $15 minimum wage rests in the hands of House progressives. These are the moments that we sent them to Washington for. If a $15 minimum wage is included in the Covid relief package, it will only need 51 votes to pass the Senate, as opposed to the 60 that is generally required with the filibuster, which the Democrats refuse to remove. It means that this could be our best chance to give working people a raise for years to come.

The pandemic should be a wake-up call that essential workers, hailed as heroes for their tireless work, deserve at least twice the current minimum, which hasn’t budged since 2009. In fact, a $15 dollar an hour minimum wage is already a huge compromise. The fight for $15 movement began in 2012, since then $15 has lost 12 percent of its purchasing power. The $15 minimum wage increase being considered doesn’t even fully phase in till 2025. If it had kept up with productivity since 1968, the minimum wage would be $24. In reality, working people and the activists who’ve given eight years to bring us to this moment, deserve much more than $15.

Sporadic stimulus checks can only go so far to keep lights on and stomachs filled for millions of Americans. They won’t keep eviction at bay or cover medical bills forever. Working people need systemic solutions. We need a living wage. That’s what we’re fighting for at the People’s Party.

As Ilhan Omar said, the Democrats are now “sending money to less people than Trump did.” Call the members of the Squad and share on social media. Forward this update to friends and family and ask them to call The Squad and #FightFor15.